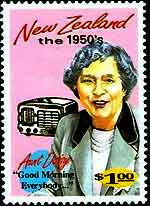 There are no signs that Bell advertised before the early 50s despite many other brands being strongly promoted by shops such as Bond and Bond, Wisemans and McCabes.
Makes such as Skyscraper, HMV, Philips, Ultimate and Columbus were well advertised, particularly battery operated portable radios.

This site is in progress. I'm keen to add all information that is available so if you have some memories, printed material, photos, etc., please contact me.
- Kurt Marquart.

Cliff Maxwell, Chief Engineer at Bell Radio-Tv (from 1954 till mid 70's ) has contributed the bulk of the content relating to Bell's early Tv transmissions.  I have gathered images and information from contributors who have contacted me with material and from public sources.
Introduction was provided by John W. Stokes.

If you have any photos, printed materials, and other information to add to the history of the Bell Radio-Television Corp. story please help me to expand the content on this website. I have used some photos from other websites in order to make a more complete record.  If I have used any of your copyrighted photos or other material please let me know so I can get clearance and/or include your name..